Founded in the 1950s thanks to the vision and good managerial skills of Piero Stucchi Prinetti, Badia a Coltibuono is today considered one of the first places where Chianti Classico is produced, but over the centuries it has played different roles.

In fact, in the past it was an old abbey of Benedictine monks which, despite its transformation into a villa, still has the same structure as in 1051 and the same attention to biodiversity and organic farming.

The first to cultivate the lands of the abbey with vines, olive trees, silver firs and chestnut trees were the Vallombrosian monks and the name ‘Badia a Coltibuono’ derives from them , synonyms for good worship, good culture, good agriculture and good storytelling.

From then on, the place experienced a period of wealth and prosperity until its decline in 1810 when, after the expulsion of the monks from all the monasteries, the abbey was suppressed and sold, and its rooms turned into farms. Badia a Coltibuono flourished again in 1846, when it was purchased by the Florentine banker Michele Giuntini, the ancestor of Pieto Stucchi Prinetti, who was responsible for its transformation into a modern winery and the beginning of the production of Chianti Classico, which had been kept until then in the cellar as a family reserve.

Badia a Coltibuono extends for 800 hectares; its vineyards are located in 53 of these and are managed according to the principles of organic farming which uses only natural substances to minimise the use of copper and produce products that are completely natural. The vines are supported with chestnut stakes and fed organically with organic fertilisers and controlled grassing. The cultivation includes Sangiovese, Canaiolo, Ciliegiolo, Colorino, Mammolo, Malvasia Nera, Pugnitello, Fogliatonda and Sanforte.

Vinification, refinement and bottling take place in the Cantina dei Monti, the modern fortress built with respect for the surrounding landscape and eco-sustainability to enhance the characteristics of elegance and uniqueness of the individual products. The harvest is processed here by gravity, extracted by pressing, fermented with indigenous yeasts from the grapes themselves and aged in oak barrels. 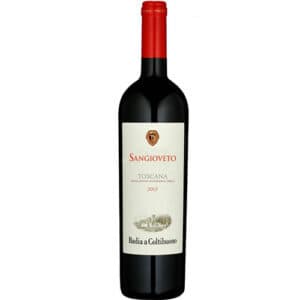